What is a sworn translation in Brazil?

A translation is legally valid for presentation to Brazilian public sector authorities. In other words, it officially mirrors in Portuguese the contents of the original document it was translated from. It can be called either a Certified Translation or a Sworn Translation. It is issued by a professional duly certified as “Tradutor Público e Intérprete Comercial” (Public Translator and Commercial Interpreter)  by the “Junta Comercial”(Board of Trade) of his/her state of residence in Brazil, in compliance with the rules and guidelines established for such a translation

The Sworn Translation is what gives legal existence in Brazil to a document written in any language other than Portuguese. Decree No. 13,609, dated 10/21/1943 states that:

Art. 18 – No book, document, or paper of any kind, issued in a foreign language, will have any effect whatsoever at Federal, State, or local agencies, nor at any level, court or jurisdiction, or entities maintained, controlled or guided by the public branches of government, without being accompanied by its respective translation, done in accordance with these rules.

Sole paragraph – These provisions include notaries of all types, which may not record, issue certificates, nor certified copies that are, in whole or in part, written in a foreign language.

In other words, any paper written in a foreign language (i.e. other than Portuguese) has no legal validity in Brazil, unless it is attached to the corresponding sworn translation. Note the “attached”. This means that the original document (or a copy thereof) must be attached to the translation. The latter does not replace the original document. This translation is always printed in a hard copy, in at least two counterparts: one that will be delivered to the requesting client and another that will be permanently filed in books kept by the Public Translator. In Brazil, there is no such thing as a sworn translation by fax, e-mail, nor any electronic storage media.

Does a sworn translation make the original document valid in Brazil?

No. It does not give it any additional value to what it already had in its original language. The sworn translation only allows it to have whatever effect it may have, if any, before Brazilian authorities. A counterfeit document will remain equally false after the translation. The Certified Public Translator’s job is just to make it officially understandable; it is not up to him/her to ascertain the authenticity of the document being translated, and s/he is not empowered to certify it. In short, the sworn translation of any document does not alter its effect, just renders it acceptable before the Brazilian authorities.

How much does a sworn translation cost?

The “Junta Comercial” of each state sets the mandatory rates. For the State of São Paulo, the prices per “lauda” can be found at JUCESP. The rates are set by the “lauda” and depend on the type of document (either common or special text), and if it is a translation INTO Portuguese (“tradução”) or FROM Portuguese (“versão”). For information on rates in other states, browse through their respective Junta Comercial web site, however not all of them offer this information online.

What is a “lauda”? Is it equivalent to a page?

No. For Public Translators, one “lauda” refers to 25 typewritten lines. As the law that set this size dates back from 1943, it was long before the computer age. In 2003, for the State of São Paulo, JUCESP determined that a 1,000-character “lauda”, not counting spaces, would be equivalent.

Therefore, it is not possible to determine precisely in advance how much a sworn translation will cost, however a rough estimate can be attempted. Most computer programs are capable of telling instantly how many characters without counting spaces there are in the translated file, so it is a matter of multiplying by the correct listed rate. The first “lauda” or part thereof is charged as one “lauda”. Afterwards, the total cost increases at every one-tenth of a “lauda”.

Are there cheaper Public Translators others?

In the same State, there cannot be. The various state-wide rates are independent from each other, but the rates within the same state are always the same.

What is the difference between “tradução” and “versão” in Portuguese?

What is consularisation and apostille?

Consularisation is an endorsement by the local Brazilian diplomatic authorities, to certify that it is legit, usually by certifying the signature there, or certifying the signature of the notary who certified that signature. Information on consularisation can be found at Brazilian diplomatic offices in other countries, as well as these countries’ diplomatic offices in Brazil. One site (in Portuguese) that may help the search is http://www.consulados.com.br

The Apostille is a certificate of authenticity issued by signatory countries to the Hague Convention, promulgated in Brazil by Decree 8.660/2016, which is placed in a public document to certify its origin (signature, position of public agent, seal or stamp of an institution) . This public document apostille will be presented in another country, which is also a signatory to the Hague Convention, since the apostille is only valid between signatory countries.

The Apostille was instituted to replace the legalisation of documents, which were performed by consulates and were often complicated, time-consuming and expensive, and it must be provided when a document is to be presented in a country other than the country where it was issued.

The complete and up-to-date list of countries where the Convention is applied can be found at this link: https://www.hcch.net/es/instruments/conventions/status-table/?cid=41.

In registered and authorized civil registration offices, according to the list published by the National Council of Justice (CNJ).

What table of fees is applicable to sworn translations?

In the State of São Paulo, it is the one provided by JUCESP. Note that fees are subject to a sudden change, and therefore a delay might occur between a change effected by JUCESP and the update on this page.

PRICE TABLE FOR SWORN TRANSLATIONS IN THE STATE OF SÃO PAULO
according to deliberation by JUCESP No. 05, dated 10 November 10/2011.
Fees below are for each standard page (“lauda”) comprising of 1,000 characters of final, translated text, not counting spaces.

TRANSLATION = from the foreign to Portuguese language

VERSÃO = from Portuguese to the foreign language

What is considered urgent?

The law defines as urgent job one that is executed and made available to the requesting party at a rate higher than two standard pages per business day. It is easy to compute that this implies a limit of ten standard pages per week, if there is no holiday. The surcharge is 50% over the normal rate, and is not shown numerically on the JUCESP deliberation, having been calculated to build the table above. This is the only legal parameter on urgency.

What is considered extraordinary?

According to the law, it is work performed on Saturdays, Sundays, and official holidays. The surcharge is 100% on the normal rate, and it fails to appear numerically on the JUCESP deliberation, having been calculated for the table above.

What are “certified copies” and “certified transcripts” (of sworn translations)? What is the difference?

Each certified transcript costs, as prescribed by law, 50% of what the same translation would cost then, at the prevailing rates.

When is sworn interpreting necessary? How much does it cost?

A sworn interpreter is required in Brazil whenever an individual who does not speak Portuguese is a party in any act that will make them incur in responsibilities or liabilities. The most common case is the marriage of a foreigner to a Brazilian. However, it also applies a foreigner buying or selling real estate, registering a child born in Brazil, or making an affidavit. Interpreting fess are stipulated by law. See the table of fees by JUCESP below: 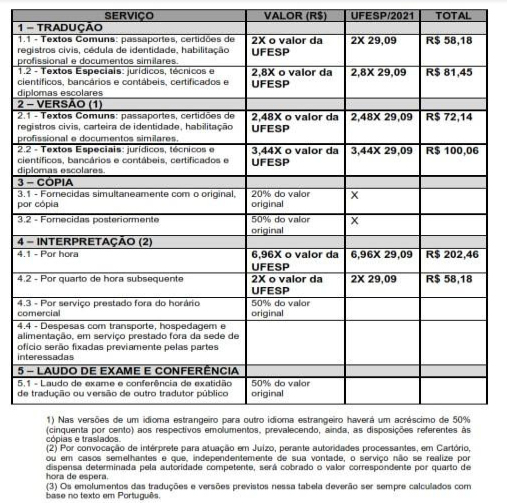 Travel time to and from the venue: to be agreed in advance